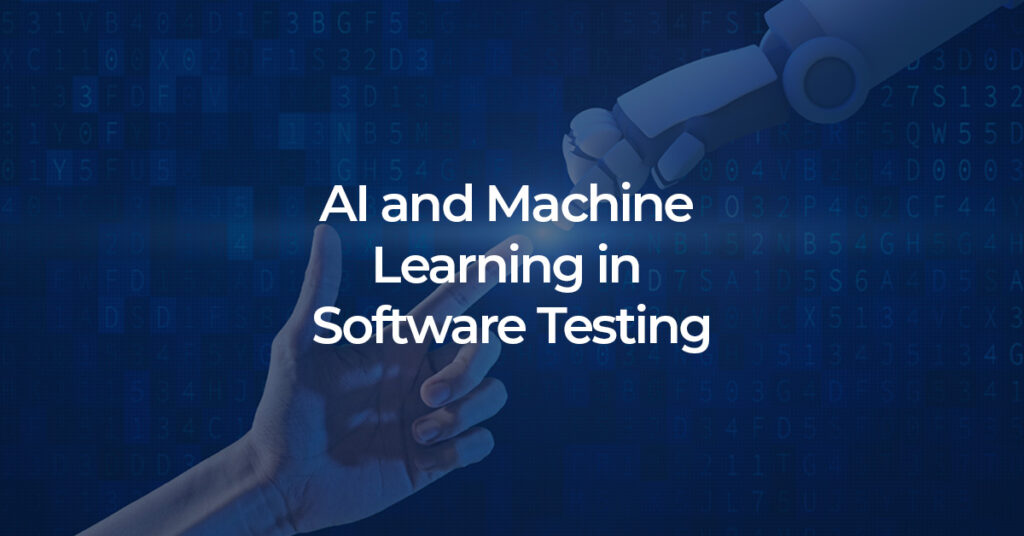 Two of the most recent buzzwords in the software development industry are Artificial Intelligence and Machine Learning. While these terms are often used interchangeably, there is a distinction. Artificial Intelligence (AI) is the broader concept of machines being able to carry out tasks in a way we would consider “intelligent”. Machine Learning is a current application of AI-based around providing machines access to data to let them learn-modify it in a way that benefits them.

ML and AI can be used to help automate and reduce the number of tedious tasks in development and software testing. One might ask, “Don’t the test automation tools already automate the tedious task for us?”. Of course, they do, but they also have limitations. The value of AI comes from reducing the direct involvement of the developer or tester in the most mundane tasks (Human intelligence is still very much needed in applying business logic, etc.).

For example, consider that most (if not all) test automation tools run tests and deliver results. Most don’t know which tests to run, so they run all of them or some predetermined set. What if an AI-enabled bot can review the current state of test status, recent code changes, code coverage, and other metrics, decide which tests to run, and then run them? Bringing in decision-making that’s based on changing data is an example of applying AI.

AI can design software that is capable of self-testing and self-healing. A self-testing system or software can run periodic scans, record results, recommend solutions, and notify the developer. What makes it self-testing is that it does all of this without a manual prompt. Self-healing is the ability of a system to implement needed changes or modifications automatically.

Now, Machine Learning can augment AI by applying algorithms that allow the tool to improve automatically by collecting vast amounts of data produced by testing. Machine learning focuses on decision-making based on previously observed data. Data collection is key to the decision-making process, and machine learning is extremely valuable, requiring some data initially for analysis and then adapting as more data is collected.

This is an important aspect of AI as intelligence requires modifying decision-making as learning improves. In software testing tools, an AI-enabled tool is best tuned to suit the organization using the tool. The same logic and reasoning can be applied every time, regardless of the outcome.

Benefits of Integrating ML and AI in Software Testing

With the growing demands of software products and the increasing sophistication, it is only normal that software testing now consumes more time. However, with AI testing tools, test timelines can be halved without compromising quality.

Cuts Down on the Occurrence of Errors and Inaccuracy

Without automated tools, humans would do software testing, meaning more room for mistakes and negligence. An AI-functioning tool is less likely to make mistakes than a human.

Applying machine learning in software testing often provides a broader testing scope. AI tools function in a way that other aspects of a program may be analyzed in the process of auto-testing a particular element.

A smart algorithm can encourage the testing process, help testers find the maximum number of bugs in less time and improve reliability and accuracy. Developers use the outcomes to refine the product and learn by trial and error. AI can also be used to analyze test results, identify flaws, and predict the quality. It uses this data to predict the critical parameters of procedures and authorize the best course of action. Hence, it will be able to spot the crucial, essential, and less obvious faults.

What are the Risks of Machine Learning Data?

Machine learning models can’t grasp the context of the tasks they perform. These models rely on human-supplied training data to work. This often includes errors in the data and outliers, which can affect averages.

Human biases can creep into your datasets and spoil outcomes. For example, if diversity and inclusion aren’t considered in the initial training data, it’s likely to show flaws in the testing outcome. In overfitting, your training data fits the model so perfectly that there is not enough variability for the algorithm to learn from. That means it won’t be able to generalize when it comes to testing real data.

Unfortunately, AI cannot be applied to every type of software testing. Testing types such as integration tests, which are harder to generate and require a more advanced setup and complex flow, generally aren’t compatible with today’s AI technology.

AI in software testing and test automation has created high hopes. The advancements in AI allow organizations to transform their processes and make progress. With a future driven by robotics, IoT, and quantum computing, AI seems to be the key to change. In the future, AI will have a significant impact on the quality function with benefits ranging from superior quality to a quicker time to market, better optimization, coverage, traceability, and important savings on development costs. However, AI still has a long way to go to be completely ready to take over in software testing.