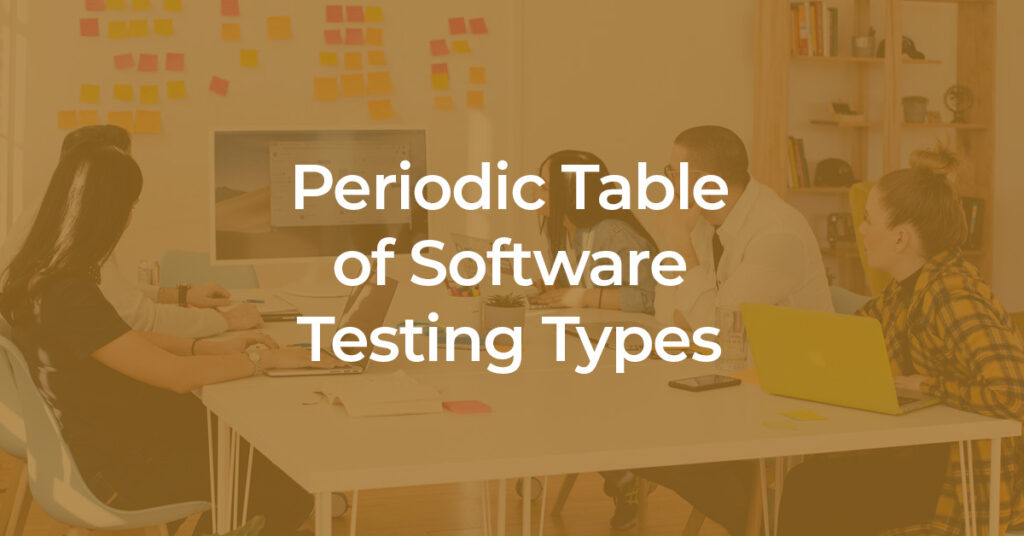 We are all very familiar with periodic tables in chemistry; now, we are in the world of software, and we are using it daily. As a helpful guide, I have created a periodic table with different types of software testing, which we use often.

There are various software testing types, and we perform them at different stages of the software development life cycle. Below is the periodic table created to let us see each of the testing types respectively.

Static testing is a type of software testing method that checks for software defects without executing the code of the software application.

A review is a systematic examination of a document by one or more people to find and remove errors early in the software development life cycle. Reviews are used to verify documents such as requirements, system designs, code, test plans, and test cases.

Walkthroughs in software testing are used to review documents with peers, managers, and fellow team members who the author of the document guides to gather feedback and update in the comments.

Inspection in software engineering refers to peer review of any work by trained individuals who look for defects using a well-defined process.

Dynamic testing is a type of software testing performed to analyze the dynamic behavior of the code. It includes testing the software for the analyzed input and output values.

Testing each individual component of an application or software rigorously against customer requirement specifications is called functional testing.

Testing the data flow or interface between two or more modules is called Integration testing.

Testing the unchanged features or re-execution of the same test cases to confirm that adding, modifying, or deleting a feature is not impacting old features is called regression testing.

Verifying whether the defect is fixed or not after getting the build from the developer is called retesting. It is also called confirmation testing.

User Acceptance Testing (UAT) is a type of testing performed by the end-user or the client to verify/accept the software system before moving the software application to the production environment.

End-to-end testing is a methodology used in the software development lifecycle (SDLC) to test the functionality and performance of an application under product-like circumstances and data to replicate in a production-like environment.

Testing the application or software randomly without looking into the requirement is called ad-hoc testing. While testing, when the tester gets creative scenarios, the tester performs ad-hoc testing. It is also a type of negative testing and does not follow any defined or structured way of testing. Ad-hoc testing can be achieved by following the software testing technique “Error Guessing.”

Testing an application’s stability and response time by applying load is called performance testing. Stability is the ability to withstand the desired number of users.

Response time is the time taken to send a request to the server, run the program on the server and receive the response from the server.

Load Testing is a non-functional software testing type in which the performance of a software application is tested under a specific expected load. In this type of testing, an application’s stability and response time are tested by applying a load that is less than or equal to the designed number of users.

Testing an application’s stability and response time by applying a load that is more than or equal to the designed number of users is called stress testing. It checks whether the system works under abnormal conditions and assures an appropriate error message when the system is under stress.

Testing the stability and response time of an application by applying a load that is more than the designed number of users in an attempt to find the breakpoint where software crashes is called Scalability testing.

Testing an application’s stability and response time by applying load continuously for a particular period of time is called soak testing. It is also called endurance testing.

Testing an application’s stability and response time by inserting a huge volume of data is called volume testing. It is mainly done to check the capacity of the database.

Testing an application’s or software’s functionalities in various environments is called compatibility testing.

Security testing uncovers vulnerabilities of the system and determines if the data and resources of the system are protected from possible intruders. In addition, it ensures that the software system and application are free from any threats or risks that can cause a loss.

Testing the user-friendliness of the software is called usability testing.

Cookie testing checks Cookies created in your web browser. A cookie is a small piece of information that is stored in a text file on the user’s (client) hard drive by the web server.

What is your go-to testing type? Which ones would you add to the list? Let us know!