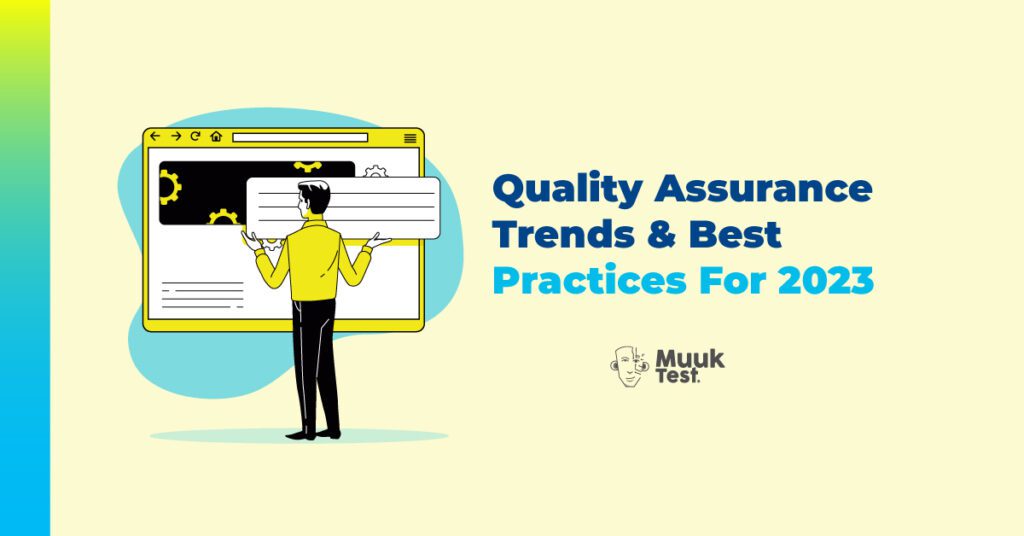 Software development markets demand faster, bigger, and more accurate software all the time. In most industries, these three elements represent a zero-sum game, whereby increases to one detract from the others. However, in software, emerging trends allow for improvements across the board.

The new approaches to development, along with modern QA principles and advances in cloud infrastructure and technologies, are trending in a direction that seemingly has no intention of reducing on any of these fronts.

Here are five of our most interesting QA trends for the coming years.

To get an idea of where things are heading, it’s good to know where they’ve come from. There are far too many trends to mention in this short article, but we’ve compiled five points based on areas currently in development and a trajectory to improve in the future.

These points are on the QA trajectory of faster and more accurate. With that in mind, here are our five QA trends that we expect to see disinvolve:

While Agile as a methodology is set to benefit from all of the subsequent trends on this list, the system itself is changing, and there are some trends within that relate to QA that we think are worth focusing on.

Agile seems set to switch even more toward cloud-based systems to maintain its lead. As always, Agile rewards creative, adaptive thinking, and this feel like something that will benefit companies adopting cloud-based Agile systems in the future.

Further, the agile process lends itself to other parts of the project. As Agile develops into more of a work ethic than simply a development methodology, aspects of it are going to be considered for use in other departments for complex projects such as marketing and human resources.

Another methodology set to benefit from current QA trends is DevOps, the market for which is projected to break the $20Bn mark by 2026. Like Agile, DevOps is continually evolving and adapting to new requirements.

Again, it’s expected that the reliance on the ‘serverless’ architecture of the cloud will increase, allowing more focus on development and testing. As well as this, a movement to less centralized architecture like microservices is likely, allowing applications to be structured as a series of coupled services and helping isolate individual components from errors in other areas.

Test automation is growing in popularity, and for a good reason. As more manual tests are being replaced with automation, bottlenecks in production are opening up, and the capacity for continuous testing increases.

The trends for automation suggest, at the very least, that regression testing will soon be almost entirely automated. While automated testing is becoming more familiar to teams, it’s still under-utilized. As more experience is shared, expect it to take off quickly, along with more advanced automation tools being developed.

Automation for mobile apps also looks to be on the rise. The pressure to release software faster has led to better automation practices, and the integration between cloud-based device labs and automation tools looks set to improve soon.

A step up from standard automation is codeless testing automation, something which may become more popular in the coming months and years. Codeless testing offers several seemingly outlandish promises, but there are suggestions that the exponential growth of this testing method will increase at 15.5 CAGR for the next ten years.

This isn’t exactly a new trend, but it looks like it’ll continue. As it stands, the application of AI is still a primitive science, and many machine learning algorithms are still waiting for enough data to be trained.

As the applications and understanding of AI grow, you can expect to see it implemented for various challenges of software testing; to generate better test cases, data, scripts, and reviews.

AI has the potential to identify the best possible times and methods of testing, predict faults before testing, and navigate tests by risk and speed. AI is already used to generate test cases based on the behavior of users, and gather metrics from regression tests for monitoring, so look for more developments in these areas to come.

With these predictions in place, let’s take a look at how these trends might benefit the next generation of software.

The Benefits of these QA Trends to Modern Software

So, broken down by the same categories, what are the advantages of each of these trends to new software?

As always, developments in Agile translate to improved quality, decreased costs, and faster time to market. But further improvements to moving to cloud architecture will also focus on improving the satisfaction ratings by freeing up more time to spend on user experience.

Continuous testing improvements will undoubtedly lead to faster feedback and bug detection. In addition, adopting the Agile philosophy in other areas of companies will lead to intelligent breakdowns of other complex internal processes and iterative procedures that can be effectively monitored and improved.

The adoption of serverless computing in DevOps will streamline the entire software lifecycle. It also reduced the workload for developers to focus on quality development rather than upkeep.

The microservices architecture allows for decentralized innovations, where teams can control their portion of the project and should improve release times and resource allocation in general.

This one’s an obvious one. The same thing that’s made test automation so useful in development is the very thing that’s set to continue in the future, faster tests, more tests, and better outcomes all around.

Codeless testing comes with a wealth of immediate benefits.

Firstly, testing becomes so simple that even complex automation is accessible to inexperienced testers with no prior testing or programming knowledge.

The availability of human resources when it comes to testing gets a significant boost. This is true for testing itself but also for feedback cycles for review. Testers can also execute immediately, and there’s almost no learning curve, as opposed to the requirement of testing and coding protocols in older methods.

Much like automation, AI is set to continue improving the quality of software in the same way it has been up until now.

Another hidden benefit of more usage of AI will likely come from how data is gathered and arranged.

With more machine learning involvement, data storage and labeling will be done with the algorithms in mind. This should boost the quality of data recorded and further empower future algorithms.

Ultimately, the benefits from these trends to the QA of the next generation of software will come from the improvements in time to market, accuracy, and production efficiency. Simply put, software should be getting better, faster, and more complex all at the same time.

All of the software quality assurance trends we’ve mentioned facilitate the best practices of software QA, including the leverage of automation, testing early and often, defining clear objectives, and iterative quality gates.

With many of the current practices still in their infancy and trends in every area looking positive, it’s an exciting time for the future of software development.