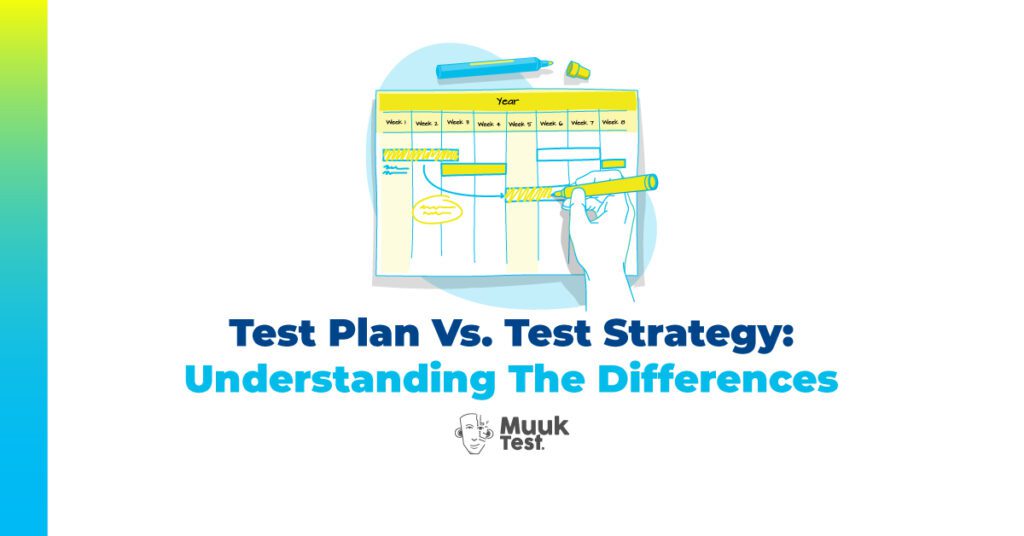 Test plans and test strategies are part of a thorough and effective QA system. They often work in tandem, representing different goals and scales of implementation while complementary to one another. But what’s the difference between them?

This common confusion isn’t helped by the fact that there seems to be some overlap in their usage, at least colloquially, so we’ve come to help set things straight. To do this, we’ll go over some of the basics of each one and how you should be able to tell them apart.

If you’ve been wondering about the difference between test planning vs. test strategy, hopefully, you’re about to have it all clarified. Here, we look at both individually and then compare some key differences.

The Role and Definition of a Test Plan

When planning your testing for each project, you’ll set your approach, scope, and the order in which you’ll be testing. This information forms the body of your test plan, which is essentially a reference document that houses all the details that fall under these categories.

When testing, you’ll need to know which outcomes are expected and how to tell if the test has worked. This means having pre-defined terms to verify the success of a test. You’ll also need to assign someone to do the tests, detail how they’ll go ahead, and other elements to make sure it all goes smoothly.

This is the role of a test plan, and it’ll be a document you can change as needed. Your test plan could even use some of the SMART analysis principles for its objectives, with goals that are meaningful to the task.

The contents of the test plan document should include the following:

To write one, there is a series of steps to follow, typically leading from software analysis through the strategic design we will discuss in the next section, then defining your test criteria and allocation of resources. The test plan should end with scheduling and the determination of test deliverables.

Ultimately, the test plan will cover details of how the testing will go ahead for the specific testing requirements. These ‘how’ questions include how many cycles of testing there will be and how they will be coordinated. This will be a document that works according to the test strategy and applies to a single project.

Therefore, the test plan is a complementary and supporting document to the test strategy, which comes before the plan design and that we will describe next.

The Role and Definition of a Test Strategy

To put it simply, a test strategy answers the ‘what’ questions of the testing ideals of the company as a whole. The first question will be, “what are we trying to accomplish overall?” Your testing strategy should define your high-level testing objectives and identify what types of testing are in scope and which are out.

From this point, the strategy aims to reduce these high-level objectives to a more actionable series of processes and activities that lead to them. This includes the risks that stakeholders will be exposed to and how testing might mitigate them. However, it doesn’t need to go into the finer details of testing in individual projects; since that’s more the scope of the test plan.

When designing a test strategy, a series of steps should be followed so that every objective is covered and the strategy is understandable to stakeholders.

The test strategy is a single document outlining things in broad terms, and its design begins with the definition of the scope of testing: what are you going to test? This is followed by the testing type identification and what are the supporting documents for the test strategy.

Next, the environments need to be laid out. Finally, the key deliverables need to be highlighted. This will align with the company’s overall objectives in this context. The final document should be a company-wide test strategy, and it’s something that rarely changes.

This document is designed with the stakeholders in mind. It’s tailored to a specific audience and needs management approval before testing can go ahead. As you should be starting to establish, there are some subtle but important differences between the two documents. Test planning vs. test strategy is mostly a question of how and what, but let’s take a look at some of the differences in more detail.

The major difference between these two documents relates to their resolution. Generally, one is used as a localized instruction set for mitigating defects, and the other represents the holistic approach to company-wide testing. Starting with the differences between plans and strategies, in general, may go some way to understanding the differences here, too.

Then, here are some of the other key differences as points:

So, while the differences might be subtle, they are distinct. The testing strategy is a large-scale, static document representing the company’s desired outcomes. The test plan is one component of implementing this as it relates to individual testing projects.

One of the most obvious differences, aside from the scope of the documents, is their drive and stage of development. The software strategy document is a preliminary document drawn up by the project manager before development starts. Then, it defines the approaches needed and outcomes expected from the stakeholder-needs perspective.

The testing plan is a smaller, narrower-scope document that applies to a specific part of the project. It’s drawn up as needed when testing needs arise and is used as a reference document for the QA team.

Test plan vs. test strategy is a common question for a good reason. Strategies and plans are often mentioned interchangeably, and the differences can be subtle. In this case, the differences come down to the motivation for either. A test plan is created in response to the needs of the product; a test strategy is drawn up by the needs of the business.

As such, the latter stays relatively unchanged compared with the plans drawn up in various contexts and sometimes in multiple. However, despite the differences, these are essential and complementary documents that should be well understood and employed as part of a comprehensive QA process.