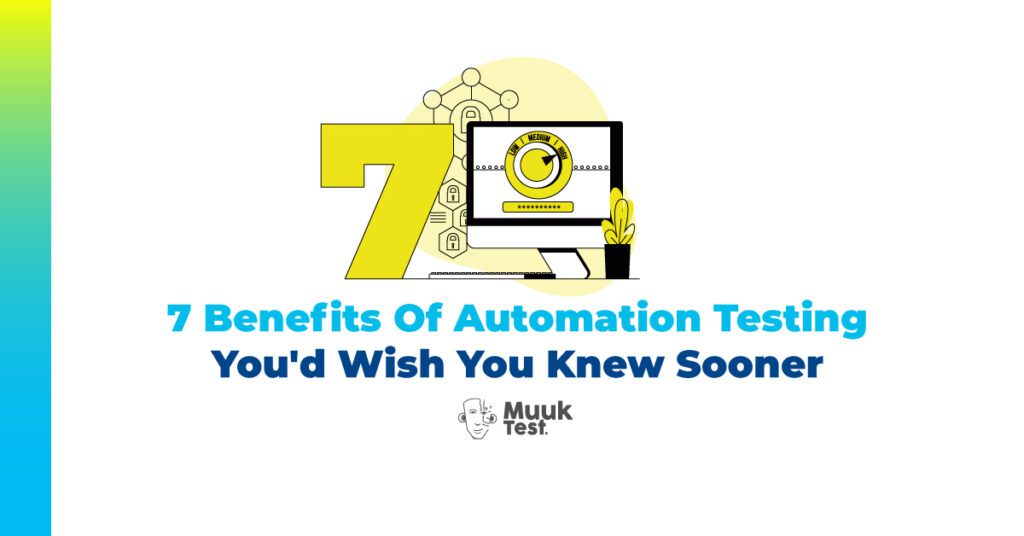 If you’re still unsure whether to adopt automation testing into your development process, this may help. The benefits of automation testing are rapidly spreading into the consciousness of software companies, with some impressive figures coming out of some of the key players in SaaS measuring substantial increases in ROI as a result.

We’ll take a look at that in this piece, and we’ve got a list of seven major advantages of automation testing to go through, too. But before we do, let’s take a moment to talk about the urge to automate as a driver of growth and competition.

Applications of all kinds tend to scale as companies grow, and manual testing can only take a product so far before it becomes unsustainable in software development’s modern, competitive environment. While a necessary component of overall QA, manual testing is a slow and cumbersome process and, in many areas, is prone to inaccuracies that do not need to be present with modern, automated testing methods.

As companies start to see the benefits of automation testing, automation tools are replacing manual testers in a growing number of cases, and development is becoming more agile as a result.

When taken together, manual and automation testing benefits span the full range of the QA requirements for good quality software – the trick is knowing which to put where. And with automation tools taking the strain off of manual testers for scaling companies, modern companies realize that to stay competitive and grow at the same time, it’s important to adopt automation where it works best and free up time for manual testers to work on the areas of the development that really needs them.

Just in case you need some convincing, we’ve put together a list of the seven most significant benefits of automation testing to consider.

Before we begin, it’s worth repeating that manual testing will always have its place. The benefits we’re listing here are in relation to the areas of the testing process that lend themselves to automation. Not all areas do this, so before going further, it’s a good idea to differentiate between the strong and the weak candidates for automation.

That’s a topic for another post, but it’s important to understand why automation is so useful and not simply how. With that in mind, here are the most valuable advantages of automation testing as we see it.

The first of the benefits of automation testing relates to another QA principle. Continuous testing refers to the ongoing process of running tests on software throughout the development process. The idea is to test early and often and receive immediate feedback along the process to know exactly what’s working and what’s not.

That feedback we just mentioned is also one of the major advantages of automation testing. Automation provides feedback much faster than manual testing, allowing information to get from testers to developers in a much shorter time. Shorter communication means quicker fixes, which means less time to market.

Automation testing also lends itself to repeatability. One of the ways it does this is by allowing testers to reuse no-code test automation tools, something which is particularly useful in integration testing, where otherwise, every single change in code needs to be manually addressed by writing and rerunning test cases over and over.

Automation solutions ensure that tests don’t need to be written or executed every time there’s a new change. Instead, you can reuse the scripts as needed without having to start over. Some automation tools offer keyword-driven testing, which is another way to reduce the efforts involved in reusing test scripts, as it allows you to reuse keywords with the same tests simply.

As we mentioned, scaling the product as part of company growth is becoming important to compete in modern software development. This can, in theory, be done with manual testing. Still, with the demands of development increasing, software needs to come to market faster and more accurately than ever before, and scaling manually means increasing testers, increasing the time spent testing, and ultimately representing a significant increase in resources.

Automation testing can be scaled with a small modification to the solution. Because the setup takes the same amount of time, doubling the testing takes less than half as long, increasing the efficiency of the testing process with scale.

End-to-end testing helps teams expand their test coverage by adding more detailed test cases than other testing methods. However, this typically requires a larger team and is a more complex and time-consuming form of testing. Automation testing allows this testing on any scale with just a small amount of effort.

This creates time to test more features across more configurations. Essentially, greater test coverage for the same or less output in terms of resources.

One of the key benefits of automation testing comes from the lack of human elements. Where there are areas of testing that absolutely require the mind of a tester, there are others where that becomes an obstacle. When applied in the right place, test automation removes the opportunity for human error and hits the same steps in the testing process every time without getting tired.

This improves accuracy tremendously and can be repeated ad infinitum with the same results.

So, what does this all mean? Faster feedback, better coverage, better accuracy, ease of scalability, and everything else that comes with automation results in a faster QA process, an increase in product value, a faster time to market, and an altogether safer and less buggy product at the end of it all.

Not only that, automation can be significantly cheaper in the long run, especially at scale. And this translates to better value for money in the development process as a whole. To put this into a real-world context, HP Certified Product specialist Paul Grossman states that with automated testing, the labor cost per month will stay the same, but for the same effort, there will be five times as many tests, reducing the cost per test hour from $78 to $17.54.

The benefits of automation testing are numerous, but this list represents seven of the most appealing and immediate to the QA process of software testing. In essence, all of the benefits come from improved accuracy and speed, reducing the resources needed to run more thorough and accurate tests continuously throughout the development process.

This boosts your product value, improves its quality, and brings it to market faster, ultimately improving your bottom line and facilitating your company’s growth.